In this article, we shall detail the main results and implementation regarding the processing and classification of RADAR objects using Machine Learning (M.L) techniques such as Hidden Markov Models, Neural Networks or others.

We assume the reader to be familiar with the notions of Perceptron, Neural Networks, Bayesian Classifiers, Bayesian Networks and Hidden Markov Model classifiers. These are prerequisite notions needed for the good comprehension of the present article.

Motivations for the automatic recognition of RADAR objects

Motivations for the automatic recognition of RADAR objects

The reason for the introduction of Machine learning techniques and classifiers in the domain of the RADAR technologies are multiple.

First it is no longer possible to rely ‘only’ on human operators to read RADAR signals, like the ATC personnel in the context of aviation (civilian or military).

There are more and more a lot of constraints in terms of increase of the traffic, safety, time and budget, for example, in the aviation industry therefore operators can suffer from stress, fatigue, they can also be disturbed for several reasons and in general they may simply not be able to process all the real-time data, without the help of an automatic recognition system.

Secondly, with the rise of autonomous self-driving or remotely operated vehicles, there is a need for automatic recognition of data from onboard RADAR sensors. Finally RADAR imagery produces such a large amount of data that it must be processed by recognition algorithms to be effective.

The classification techniques for RADAR data are at the moment mainly based either on Artificial Neural Networks (ANNs), either on Hidden Markov Models (HMMs) but they can also use Bayesian Networks (BNs), Support Vector Machines (SVMs) and, additionally, all sort of Fusion classifiers.

The techniques involved aren’t new but they require some good understanding of basic linear algebra (matrix operations, hyperplane separation) and basic statistics (Bayesian probabilities, elementary concepts of statistics). The challenge is also to be able to extract the features vectors from the RADAR data so as to prevent phenomena such as overfitting.

In all cases Machine Learning applied to the processing of RADAR data must be thought of as in addition to human operators since the mission realized by the RADAR system is often critical and cannot suffer from interpretation errors. Here, we shall detail some of the state-of-the-art applications of Machine Learning techniques for RADAR systems.

In the four implementations case, the algorithms used for classification are the following:

In this article, we wished to present the motivation for the implementation and the interest for building the automatic recognition system as well as describing the way the features are extracted from RADAR data. We did not want to go into the details of the classification algorithms themselves which can involve complicated techniques sometimes, far beyond the scope of this small study.

The RADAR surveillance of the littoral is needed for performing the defence, protection and security of some geographical area and preventing for example:

RADAR must be able to perform target recognition simultaneously in the air, ground or sea. The detailed classification is very important. For instance the RADAR operator must be able to detect if the objects are persons, ships, helicopters, etc… (see illustration) 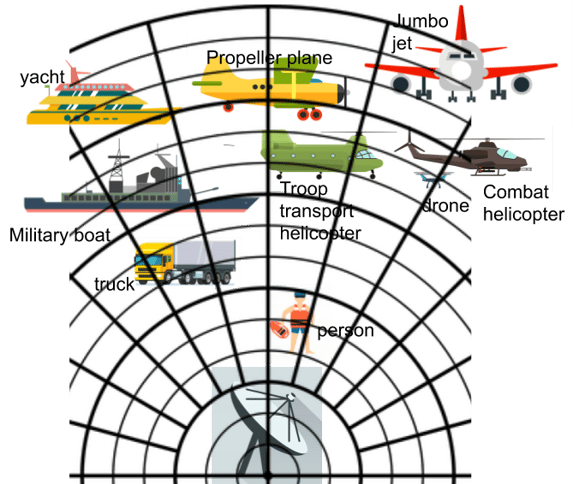 The motivation for automatic recognition here is that an operator is distracted from the primary task of tactical surveillance. Besides the operator cannot classify simultaneously and accurately all the targets.

The data needs pre-processing in this case:

The following algorithms are used for the pre-processing and feature extraction:

The wavelet is defined regarding the RADAR pulse frequency repetition.

The neural network used for the classification, using the feature vectors extracted with the aforementioned techniques, is a time delay neural network (TDDN) .

The TDDN is essentially similar in terms of concept to a 1-dimensional Convolutional Neural Network (CNN) with a stride term equal to 1.

In the implementation, the input layer is a matrix of 16 frequency banks by 32 time steps, this is roughly equivalent to a 16x32 pixel image representing the graph frequency x time, as displayed in the STFT extraction previously.

The implementation also used a Hidden Markov Model (HMM) which processed the data from the wavelet transform.

Finally the implementation used a fusion classifier with Bayesian rules and Dempster-Shafer method.

Here is a confusion matrix of the results which were obtained.

As one can see the classifier obtained overall good results but maybe not accurate enough for a critical system.

A low-probability-of-intercept radar (LPIR) is defined as a radar using special measures to avoid detection by other (passive) radar detection systems such as the radar warning receiver (RWR).

Such anti-detection measures involve strong anti-jamming capacities. A LPI radar is a key asset in a battlefield and therefore its automatic detection (by the opposite side) has a significant interest.

The extraction uses a waveform which is processed with a time-frequency transform algorithm (like a Fourier transform) to create a typical graph. That graph is processed as an image by a convolutional neural network. The convolutional network is used to extract features, not to classify. The final features are sent to a Support vector Machine classifier.

The classification of the LPIR radar is done using the following classes:

The CNN used there are various and based on designs inspired from typical convolutional networks such as ResNet or Inception-v3. As an example of the design, here is one of them used by the implementation:

`P2` is an average pooling layer

`I1,I2` and `I3` are three successive inception layers.

This is a good example of a neural network which is not used for classification but for feature reduction.

The general goal of Moving Target Identification (MTI)  by Radars is of primary importance, for example, in military applications.  MTI Radars provides good information about the detected targets locations but poor results about their nature!

Automatic recognition algorithms cannot use imagery-based recognition because MTI uses a low resolution mode. However, it is possible to use a classification based on Doppler signatures.

The Doppler spectrums of MTI systems can describe the change of the instantaneous velocity of the moving targets.

The feature vectors are created by pre-processing some characteristic target signature files where the range is superior to the dimensions of the target. The signature files are time samples created by using a series of complex techniques such as Doppler shifts and Hamming weighted FFTs ( see flow)

Each of the LDA-transformed Doppler frames is considered to be a Hidden Markov Model feature vector.

The set of extracted frames is then the observation part of the hidden markov model.

There is a huge quantity of SAR imagery representing earth , as well as data obtained from satellites or shuttles missions. These images which are obtained by Radar cannot be completely processed using ‘traditional’ imagery classification. The implementations here use an innovating and interesting technique involving Hidden markov models.

In the implementation, the technique for feature extraction is very specific.

The 2D map created by the SAR radar is converted into a 1D chain using a technique called the Peano Scan.

The Peano scan is in fact directly inspired from the spaces filling (continuous) curve built by the mathematician G. Peano [6].

The method, which is fractal-like consists into filling a square using a polyline curve which is multiplication of itself following a given logic in a recursive and fractal way. The principle is that the curve scale and copy itself in the 4 identical parts of the square, the two upper parts are rotated, then all four new parts are connected to each other, creating a new curve, etc...

The chain is created  as a succession of pixels.

Here we represent the first steps of the building of a Peano scan.

The data which is scanned is a SAR image. 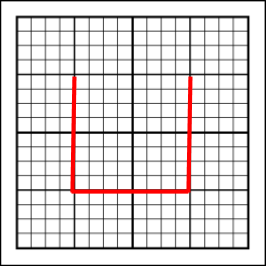 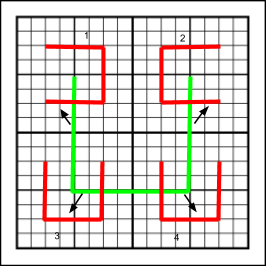 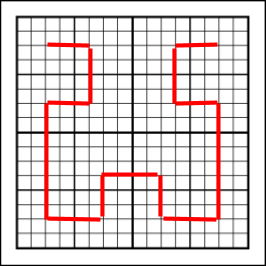 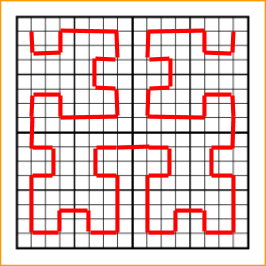 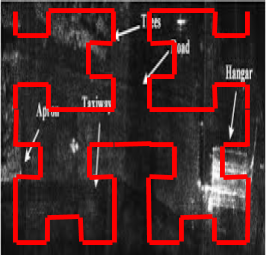 The 1-d Peano Scan chain is then a succession of N pixels. It is processed as a Hidden Markov Chain in the sense that the probability of the state of one pixel in the sequence only depends on the precedent value of the previous pixel (e.g of the neighborhooding pixels. The classification is done using a Hidden Markov Chain and Hidden markov Model random fields which involves Monte-Carlo techniques.

Our goal was to demonstrate the usage of Machine Learning algorithms in the automatic recognition of RADAR objects. As we saw the use cases are very different and the features extraction can involve complex techniques and are often the most critical part of the implementations. Nevertheless the base for the recognition is always the classification using most of the time neural networks and especially convolution neural networks and/or Hidden Markov models. Hidden Markov models seem to fit very well to the time series events of a RADAR capturing a moving target for instance. It seems in order to recall that the first neural network, the perceptron was initially developed for the U.S navy around 50 years ago, for target recognition using cameras and there is - as such - a long history as well, of using neural networks for such purposes. We only aimed at giving a very basic and partial view of the topic and demonstrate the importance of the Machine Learning techniques for operating RADARs in many different aspects.

[5] Backscatter is the reflection of waves, particles, or signals back to the direction from which they came (wikipedia)

[6] Giuseppe Peano (27 August 1858 – 20 April 1932) was an Italian mathematician and glottologist. The author of over 200 books and papers, he was a founder of mathematical logic and set theory, to which he contributed much notation (source: Wikipedia)

Tutorial: Overview of Results in the Domain of Classifications of RADAR Objects Using Hidden Markov Models, Neural Networks and Other M.L. Techniques