SAR is a method of synthetically increasing the aperture of an antenna to achieve a finer spatial resolution of the target. The method finds increasing application in Civil Aviation and industry. This article describes and shows videos of measurements, taken with SkyRadar's SAR training radar.

SAR in Civil Aviation and Beyond

Traditionally, SAR images where taken through Side-Looking Airborne Radars (SLAR), transported with an aircraft of a satellite. As the aircraft of satellite moves, the antenna position changes over time. Either synchronously, or after the measurement is finalized, the SAR process combines the successively recorded echoes into one high resolution radar image.

Originally SAR was used to create high resolution images of landscape. It allowed for a better and more reliable cartography than  with traditional surveillance and alignment technologies. But the increased accuracy of SAR nowadays allows to go even further. The comparison of SAR images, taken over time allows to track infrastructure deterioration (e.g. bridges) or environmental changes (deterioration of glaciers or icebergs, destabilization of mountains, or illegal deforestation. Even the unlawful plantation of addictive substances like poppy seed or cannabis.

The mixing of high resolution SAR and intelligent analytics (machine learning, artificial intelligence,  or even blending it with other sensors opens countless possibilities for applications, may it be in industry, health, aeronautics or for private appliances.

In the past, like many great inventions, SAR has been misused for military purposes, creating high resolution maps of military targets (cities, airports, army bases) for subsequent and targeted attack. As SkyRadar teaches civil aviation applications and evangelizes new applications in industry, no military examples or cases are given, neither in this article, nor in our exercises.

SkyRadar's SAR is based on the FMCW base module which is mounted in a plug and play approach on a linear axis so that it can move horizontally along the target. This is the same principle as applied by a side-lobe radar in an aircraft. The FMCW works with a very low output power of +19 dBm and an overall sensitivity of -151 dBc. One of the strong points of this radar are the three Rx input channels.

The FMCW is horizontally actuated by a high precision step motor. After every defined displacement the FMCW shoots a radar image. In a continuous approach, the SAR analysis software integrates the images (based the SAR algorithm) into a high resolution image. The trainees and the instructor can follow this in real time.

The video below shows the instructor screen. On the upper linear axis, you see the position of the FMCW on the horizontal axis. In the same time, you can follow the raw signal (IQ signal) before FFT. So the A-scope shows the raw IQ data with the local minima and maxima.

The signal is subsequently comfortably handled by the FreeScopes software. But in addition, the users can do their own signal manipulation in a scientific computing and analytics environment, e.g., with MATLAB, Jupyter, or even with MS Excel. For these purposes, the signal can be exported in real-time as a JSON feed be and subsequently manipulated with an

This makes sense in advanced University classes but also for ATSEP trainees, who want to manipulate the signal, e.g., insert disturbances or malfunctioning filters, to train error detection and fault recognition.

The Experimental Set Up

The photo and video below show the experiment set up. 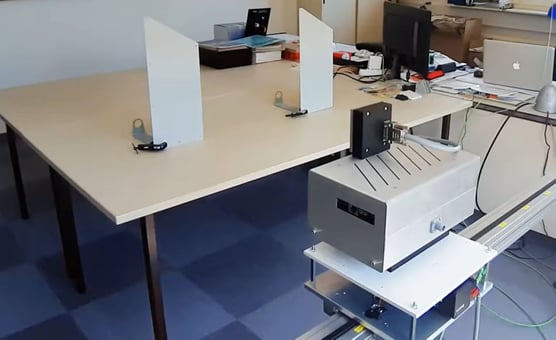 We deliberately did the experiment in a small room, full of objects. As many of our prospects tell us that they only have small labs, and those are often filled up with experimentation material, curtains at the walls, windows etc, we created worst-case conditions. So, if we get a clear image here, we can get it everywhere!

How do we get rid of the clutter?

Step 1: the location is scanned without the target

Step 2: the location is scanned with the target

The image of the location without the target is deducted from the image including the target. You can clearly see that in the video below where we first only see the clutter (mainly the table where we will later place the targets, but also the reflections of walls and objects, however strongly faded down because of the dominance of the table). The same principle is used with operational radars, where electronic maps with the pre-scanned clutter (e.g. buildings) are deducted from the image with target.

This "staged approach" works as we have our high precision step motor which can reproduce precisely the same position per corresponding shots. This can also be applied in industrial or medical applications. It wouldn't work with side-looking airborne radars, but luckily we don't have computer screens and office desks flying around in the Clouds 😋.

This principle can also be applied on the Generation 6 versions of PSR and FMCW base module, an improvement made possible through the innovative rotary step motor in the new tripod.

Staged Measurement and Display in a B-Scope

The video above shows the SAR image generation, as the image builds up. At first (until 1:10 min of the footage), the room is filmed without the object. We consider everything in the room, all objects and walls as clutter. The image is dominated by the table in the front.

This process continues until approximately 1:10 min of the video. Then you can see in the top right corner that we change the setting from clutter to object.

The second iteration shows objects. Before generating the image, FreeScopes deducts the clutter. In the period of 1:10 min to approximately 1:25 you witness the process of system adjustment. On the left side of the B-Scope you can see how the system auto-adjusts the maximum and the minimum values displayed, in order to produce a clean image of our target (which should at its strongest point represent our displayed max value).

The objects are shown as their radar cross section. It is interesting to see that their left and right edges show stronger reflection than the center part. We configured the max value of the y-axis in the B-scope as 10 m. Before we had it set to 3 m, which sounded reasonable as the objects are placed at 1.15 m. It worked but the objects looked like over-size eggs, dominating the image. So we chose 10 m to satisfy our personal aesthetic perception. You are absolutely free to define the max values and thus the scale of the axes.

Measuring inside even a small room is possible and produces clear results. But it also has its limits. Therefore additional out-door measurements or measurements in bigger rooms makes sense. If we for instance want to create nicely shaped 2D cross sections of objects (e.g. a car, or an aircraft), we need more space. Why?

The explanation is simple: The radial resolution of SkyRadar's FMCW is 83 cm. Meaning to see a radial cross section, we need to scan bigger objects. The over the thumb rule is that great images can be create of objects with a size > 10 times the radar's radial resolution. So a diameter of > 8 m would be able to create outstanding cross sections. The radar has a range of > 50 m, and it is light-weight, so this can be done. But even objects of a diameter of 2 m would be absolutely sufficient for training purposes, e.g. the model of an aircraft with the body length of 2 m and a wing span of 2 m (e.g. a wooden model).

SkyRadar's SAR produces precise and accurate images even inside smallest labs with many disturbing objects inside. For measurement of bigger objects, the system can be deployed outdoors, or beam outside the lab-window. Positioned as an economical training and education solution, it is affordable even on small budgets. The open system approach allows to connect and export data to existing solutions in your academy or university, such as MATLAB or any other analytic software.

Free e-Learning on Radar Basics and SAR
FMCW-module and SAR-module: How do they work together?

The Most Precise Training SAR in the World - Insights, Video Footage, Background-Information