We all know the pivotal importance of radar in air traffic control services.  There was a time when air traffic control services used to work on procedure control.  But with the passage of time, the density of traffic increased which required a more efficient way to handle the traffic. With the introduction of radar technology, the game plan was completely changed. Now an air traffic control unit cannot be considered without radar.   A radar system in Air Traffic Control Services holds fundamental importance.  For the provision of Air Traffic Control Services, radar plays a key role by helping Air Traffic Controllers in the identification of the bearing and distance of an aircraft along with information related to identity and altitude.  This information is of prime importance for an Air Traffic Control Officer for ensuring the required separation between aircraft. Radars are an example of sensors that possess certain strengths and weaknesses.  For instance, they have better velocity and distance resolution as compared to other sensors.  The main drawbacks include lower angular resolution and radar-to-radar interference.

Sometimes interference errors are produced and the performance of radar is impacted. We know that the performance degradation will impact the safety-associated critical operations that include high-accuracy positioning and navigation. This is the basic requirement for the smooth functioning of air traffic control services. A situation where radar services are obstructed or performance is decreased creates immense pressure on air traffic control services.  Apart from work pressure it also impacts the safety of air traffic. Hence for ATSEP, it is important to know the interferences that can disturb the functioning of the radar system.  Here we will discuss interference due to other radars.

Outcomes of an interference

Interference when Radars are operating close to each other

Sometimes radars happen to be operating in close proximity there are chances that they may interrupt the performance of the radar. Imagine that you are working in Air Traffic Control Services and an experimental communication system gets installed in close proximity. There exists a clear probability that its transmitter may interfere with your radar frequency band system even if it stands to be operating on a different frequency. Such interference can result in form of a spike in your frequency band.  Whenever you collocate radar equipment that is operating on nearby frequencies this problem will be confronted. It is called de-sense. It is very similar to hearing someone carefully sitting across the room when a louder chatter and clatter is going around in your room.

Interference when Radars are operating at a distance

Although according to our previous discussion it was understood that when radar operates close to each other interferences are expected to occur. But the case may be the same even if the radars are operating at a distance.  When two radars are observing the same target then in such a case interference still can occur. Interference under such a scenario can occur even if the radars are expected to operate at a distance wide enough. This is true in the case of uncooperative skin targets.  The same holds true for targets being formed due to beacons or transponders, including civil aviation secondary radar systems.

The interference occurs due to an unwanted radio signal that is being generated by a strong energy source that has the ability to penetrate a circuit irrespective of angle. In air traffic control services radar interference is a well-known challenge.

The radar interference can occur in situations when:

If any of the above-mentioned conditions are met the probability of interference increases. There are a number of techniques that can be applied to mitigate radar interference.

Fabrizio et. al. proposed a signal separation method. When a source of interference is blind and is creating interference. Then for separation of this source, a Multipath signals algorithm is used that approximates waveform creating interference in the same frequency channel. But there exists a shortcoming in this proposal as it cannot be effective when there is no multipath existing between signal-creating interference and the victim radar. When interference is not based on multiple paths but rather is of a known type then educated guesses about signals parameters are obtained by utilizing time modulated windowed all-phase Discrete Fourier transform.

In the Air Traffic Control (ATC) environment Secondary Surveillance Radar (SSR), Aircraft Dependent Surveillance-Broadcast (ADS-B), Airborne Collision Avoidance Systems (ACAS), and military identification systems (IFF) are using the same frequencies. Technical or operational changes in one system have an impact on self-interference within the same system as well as on the operation of the other systems.

Interference occurs where there exists an overlapping zone. The radar system based on algorithms identifies to which radar data a particular target belongs. Hence this selection method provides a preemptive measure to counter interference caused by other radar signals. We can consider these algorithms as a way to avoid interference in the radar system. The smarter the algorithm, the stronger will be the prevention of interference. 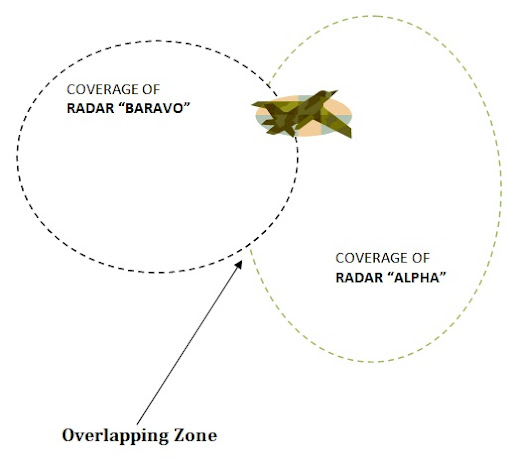 Outcomes of a Radar Interference

Whenever radar interference occurs it can result in  Delay in response time.

The ATSEP should start its probe by looking at the transmitter of the other system.Possibilities for rectification of such errors are expected to exist in the replacement of the transmitter by a transmitter from a different radar system.

ATSEP should try to focus on the fact that a high-power diplexer with RF and microwave filters is required to detect and sort out unwanted signals that are received. Diplexer will help in the selection of the right type of filter.  In other words, the focus should be on a selection of the filter that can be useful in eliminating or separating unwanted signals creating interference in the transmission or reception.

Sometimes a region is under the coverage of multiple radars. These radars may be in close proximity or at a distance. As the coverage area is the same hence the radar signals will be overlapping in this zone.  Imagine there is an aircraft flying in such an area. It comes under the coverage of a number of radars.  Now radar based on filters being used and algorithms can easily identify radar data to which this target belongs.  Although manually there exists a provision to look at the traffic at radarscope by going in selection mode for multiple radars and having a mono view.  So we can consider these algorithms as a technique of auto adjustment. The outcome of an error due to such interference results in an increased number of false targets and a loss of replies.

Frequency interference due to other radars utilizing the same radio frequency can be mitigated. The best way to deal with this challenge is prevention as far as practicable. Air Traffic Control Service providers are facilitated by the concerned sector regarding the allocation of a dedicated frequency band. The concerned sector is most probably a government organization. Upon fulfillment of the request for a separate frequency band a frequency locator too is provided to the user. This frequency locator tool is a spectrum analyzer device. Whenever there is a use of frequency that exists in the allocated band it is depicted on the spectrum analyzer device (Fixed Monitoring Station). The user will submit the report to the concerned organization to restrict the use of the frequency. This whole process is based on a manual intervention that is to monitor the external source of the interference with the support of a spectrum analyzer. But the Radio Frequency Identification detection algorithm now can be used. This helps in an automated and objective approach toward the identification of interference and its source. As AI is the future of aviation we can expect these breakthroughs to be the milestone toward the wider image of what is coming next ahead to the aviation industry.

SkySMC - SkyRadar’s System Monitoring and Control Suite is a pedagogically enhanced, fully operational monitoring tool. We have optimized it to cater for the ATSEP-SMC training compliant to EASA's Easy Access Rules for ATM-ANS (Regulation (EU) 2017/373) and ICAO Doc 10057.

SkySMC is not a simulator, but a fully operational open monitoring system. It comes by default with a server including various virtualized applications and virtualized servers. There are various hardware extensions available from a training infrastructures and monitorable training radars to complete ATM systems.

Stay tuned to be always the first to learn about new use cases and training solutions in radar qualification (real radars or simulators) for ATSEP.

Or simply talk to us to discuss your training solution.