A pilot is getting ready to depart for a particular destination. Before departure, he or she will plan his flight just like any traveler who plans about his journey.

As the traveler has to encompass all the required aspects of his journey in his planning similarly a pilot also caters to all aspects pertaining to flight in his plan. A traveler focuses on Time, Fuel, Food, Luggage, Route, and Weather conditions similarly a pilot has to consider Flight Duration, Fuel, Maximum Takeoff Weight, Weather Conditions, etc. before departure. Like every journey is different and so are its requirements the same is the case for flight.

We can define flight plan as “a document which provides specified information to air traffic service units relative to an intended flight or portion of a flight of an aircraft”.

The purpose of a flight plan is to inform the competent ATS units enabling them to supervise the flight within the scope of air traffic control as well as the flight information service and alerting service. 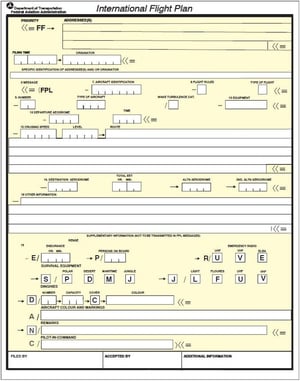 This is item No.7 in the flight plan. In this input field, we enter the identification of an aircraft. The maximum limit is 7 alphanumeric characters.

FLIGHT RULES AND TYPE OF FLIGHT

This is item No. 8 in the flight plan. This item indicates both flight rules and type of flight. Flight rules are important due to different regulations, weather and separation minimums for IFR and VFR flights.

In this field, we enter information regarding the type of flight rules according to which the pilot will fly its aircraft. The information is required to be entered in the “Single Alphabet” form and that’s why we can enter a minimum 1 and maximum 2 characters in this field.

This is the continuation of Item No. 8 of the flight plan. In this field, we enter information regarding the type of flight. The information is required to be entered in the “Single Alphabet” form and that’s why we can enter a maximum 1 character in this field.

NUMBER AND TYPE OF AIRCRAFT AND WAKE TURBULENCE CATEGORY

Consider a pilot flying B772 than he will fill in item No. 9 as follow:

An important point to note here is that if it is a solo flight, the input field under number is omitted. But in case if it is a military aircraft formation of five F17 than he will write as follow: Number 05 Aircraft Type: F17

The type of aircraft is indicated by the manufacturer’s designator. If no such designator has been assigned, or in the case of formation flights comprising more than one type, insert “ZZZZ” and specify the number(s) and type(s) of aircraft in Item 18 preceded by “TYP/” (up to 60 characters can be put, for example: TYP/2F16 5F17).

Make an oblique stroke followed by one of the following letters to indicate the wake turbulence category of the aircraft:

This is Item No. 10 of the flight plan.
Capabilities comprise the following elements:

a. presence of relevant serviceable equipment on board the aircraft;
b. equipment and capabilities commensurate with flight crew qualifications;
c. where applicable, authorization from the appropriate authority.

Radio communication, navigation and approach aid equipment, and capabilities - Item 10a and 10 b

Here insert one or two of the following letters to describe the serviceable SSR equipment carried:

Other indicators are B1, B2, U1, U2, V1, V2, D1 and G1 (denoting various ADS-B and ADS-C equipment) but these are very unlikely to be used in general aviation.

Item No. 13 of the ICAO Flight Plan. The input field is required to be filled with a four-letter ICAO aerodrome designator which is documented in ICAO Doc 7910.

In case if a place does not have a four-letter indicator, in that case, insert “ZZZ” and in Item No 18 write its full name after “DEP/"

Item No. 13 of the flight plan. It has a maximum limitation of 4 characters.
In this field insert estimated off block time. The time should be written in Coordinated universal time.

This is Item No. 15 of the flight plan. We have to enter the first cruising speed and altitude/ level along with the detailed route.

It should be true airspeed for the first cruising portion.
It should be written as follow

Only for uncontrolled VFR flights, the letters “VFR”.
General aviation example: A055 (assuming that you will fly at 5500 feet altitude)

This is Item No.16 of Flight Plan. It has four input fields. In Field Below Destination Acrodrome write down four-letter location indicator as represented in ICAO Doc 7910

In case if a place does not have a four-letter indicator, in that case, insert “ZZZ” and in Item No 18 write its full name after “DEP/"

Infield below EET writes down the total elapsed time required by a pilot for completing this journey.

It is Item 18 of the flight plan. Any information that cannot be part of the above-stated points but it is deemed necessary and important for the information of all concerned is included here in this column.

Other reasons for special handling by ATS must be denoted under the indicator RMK/. If your destination aerodrome wasn’t having four-letter indicator as per ICAO, in that case, you must use ZZZZ. Hence for that ZZZZ, you have to give its description here in this column. Write the full name of the destination after DES/. Similarly, if you have written ZZZZ for Departure, you will write the name of departure place after DEP/. If a location doesn’t have any name, in that case, we use LAT/LONG. These LAT/LONG are written in this column. If an aircraft is equipped with a SELCAL, in that case, its code will be written followed by SEL/. If aircraft operating agency has a name different to aircraft identification, in that case, use this column and write it followed after OPR./

What is a Flight Plan and How to fill it?