This article will give an overview of the basic and fundamental notions of ML. It is part of a series developed for practitioners. The goal is to be rapidly able to apply and make use of ML.

There is a general introduction to Machine Learning on Wikipedia. We have no intention of cloning the content of that article here, unlike many people trying to explain what ML is.

Everybody can understand what is Machine Learning because the definition is contained in the name, these are machines that “learn”, e.g machines which are able to consume data in order to improve their tasks given feedback from the environment where they do perform these tasks

As humans we usually learn a lot - at least we should. We learn from our childhood the alphabet, how to write and read, usually painfully. We learn calculus, computations and how to distinguish the various objects that will populate our everyday’s life.

The mechanisms of learning - at least in our childhood- are fundamentals. We know example of wild childs like ‘wolf children’ or ‘dog children’’ or other cases of children raised by primates. In these cases, the humans did not learn properly and were at least partly “trained” by non-humans (animals). The result was a deficiency in human intelligence and an inability to resolve basic problems that any other “properly trained”  humans could address.

In our lives, we usually learn from mistakes and errors. Things that hurt us or fool us and we are able to solve such errors, mainly by learning and adapting to the new situation.

The basis of Machine Learning comes from a 1950 paper authored by Alan Turing and named "Computing Machinery and Intelligence". In that paper, Turing offers to replace the question “Can Machine think?” by other questions such as “Can machines do our work?” , “Can Machine win a game ?”, and among others “Can machine learn ?”.

In fact, Turing mentioned the Learning Machines and not the Machine Learning which is anyway the “ancestor” concept.

A Machine that could learn would be a “child” machine and would experience ,same as the humans, heredity, mutation, experiments and choices following the experiments. Complexity would be at stake so that despite strong “formal” and “imperative” logic, a self-built model with a proper logic would be built as a result of the learning.  This presupposes ignorance of the child machine and also some strong randomness.

Machine Learning is therefore defined as an algorithm which is somewhat mimicking the Human learning process.

The “primitive” idea behind ML is a machine which is fed by data, a “training set” and which builds a model, usually a decision, choice and strategy model, using these data in order to perform some tasks in an environment, independently of any human intervention, depending on the response of the environment, a feedback can be generated, which can take various shapes : “right” or “wrong” or a decimal score of a feature vector for instance. That feedback, coupled to the data from the environment can be integrated into the previous dataset to create a new dataset from which a new model can be built and so on. 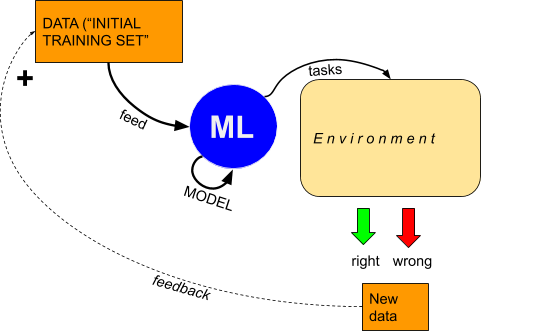 This presuppose the following components:

At this stage, the reader understands that a learning machine is a Machine Learning with data, tasks and interaction with an environment. As itself, machine learning is doing nothing and unable to evolve if nothing is “injected” inside.

A learning machine is, therefore, a dynamical self-evolving system and the way it interacts and learns from its errors and from the environment is as much as fundamental as the algorithm/model it implements.

As the ML will learn and be trained and as we iterate the training steps, the model will go through the space of all the possible models

When the learning algorithm converges, this is similar to a dynamical system reaching an equilibrium state.

The “Learning” phase of a learning machine can be seen as a time system, especially if loops are introduced. This is especially true for Recurrent Neural Networks (RNNs).

In the original concept by Turing, the learning phase of a machine is similar to the education of a child and therefore induces time, contingents, possibilities etc… which makes it relevant to be interpreted as a dynamical system.

In such an approach, concepts as Markov chains, Lyapunov stability are very relevant to ML in general.

The difference may also be seen between the human process of learning, where learning consists mainly of education with teachers (“supervisors”) while animals learn more from their environment in general and self-adapt to that environment without supervision and this relates more to unsupervised learning.

What is known as “street smart” also refers largely to some unsupervised learning, e.g. the ability to learn without guidance and supervision into an unknown environment.

In general, supervised learning in ML will use labelled data. These are data - which can be of any sort - provided with a label (either by humans either from other machines) . This label indicates the nature of the data and how they must be interpreted by the machine. The task of ML will therefore be to consume a new unlabeled set of data and guess, predict and label them (eventually creating new labels) or classify them (fixed finite amount of labels).

A third category (the three basic ML paradigms[1]) is reinforcement learning. In that approach the teaching is conditioned by ‘rewards’ or ‘penalties’. The analogy with human learning is obviously the punishment from parents, the fines and various punishments from the law enforcement systems or the gifts, ‘bonus’, various perks and medals provided by the educational, military or civilian bodies.

A set of Ml units may be coordinated and cooperative. In that case we speak of Multi-agents ML. For instance a group of 1 million of ANNs which are single agents ML may be connected together - as black boxes - and cooperate together with further algorithms. This can be seen as a “team” for instance.

Some entry points for understanding ML

Here we list some of the most common ML algorithms and terminologies, and we explain briefly what they do. The literature on the subject is obviously infinitely vast, and we only aim here at giving a few entry points.

In that brief introduction to ML, we tried to be as complete as possible. Of course - as of 2020 - ML is actually a very important and strategic field of research and the concepts and notions change all the time. Nevertheless we described in that article an overview of the basic and fundamental notions of ML.

[1] There are many more alternative definitions of ML paradigms...

Tutorial - What is Machine Learning (ML) ?