The recent crash of Ukrainian Airlines Flight 752, downed by a surface-to-air (SAM) Iranian missile after a tragic human error from a military RADAR operator underlines dramatically the need for ADS-B, combined with automatic computer-based recognition of RADAR targets.

A Quick Reminder of the Facts

On 8 January 2020, the Boeing 737-800 belonging to Ukraine International Airlines and operating the route Tehran-Kiev crashed shortly after takeoff from Tehran Imam Khomeini International Airport. All 176 passengers and crew were killed.

Here is a copy of the official preliminary report from the Iranian Civil Aviation Organization Aircraft Accident Investigation Board:

“On Wednesday, 08 January 2020, at 05:15 local time, the scheduled flight No.AUI752 en-route Tehran Imam Khomeini INT'L Airport (OIIE) to Kyiv Boryspol INT'L Airport(UKBB), Boing 737-800, UR-PSR operated by Ukraine International Airlines exited from the aircraft stand at parking at 05:45 and took off from RWY 29R at 06:13. The flight continued to climb while controlled by Imam Khomeini control tower, then was delivered to approach unit at Mehrabad Airport, and was approved to climb to 26'000 feet. After losing contact with ATC Unit at time 06:18, the aircraft crashed near Sabashahr, located on Tehran outskirts.”

The crash occurred at the moment where there were strong tensions in the region, hours only after Iran launched ballistic missiles at two Iraqi military bases housing U.S Army forces (Operation ‘Martyr Soleimani’) , as a military response to a drone strike, which killed Qasem Soleimani, an Iranian General’.

A few days later, the Iranian authorities issued an official statement admitting that they unintentionally shot down the plane:

"The aircraft came close to a sensitive IRGC military center at an altitude and flight condition that resembled hostile targeting. Under these circumstances, the aircraft was unintentionally hit, which unfortunately resulted in [the] death of the many Iranian and foreign nationals"

In what follows, we will explain why and how two technologies could help prevent such tragedies: ADS-B and A.I.

Traffic Information Services-Broadcast, or TIS-B consists of traffic reporting services, mainly from other aircrafts broadcasting their position and eventually not equipped with ADS-B systems.

Flight Information Services-Broadcast, or FIS consists of graphical National Weather Service data  such as temporary flight restrictions (TFRs) or special information which are of various nature, allowing pilots to get a better understanding of the flight environment.

ADS-B consists in the broadcasting by an airplane of GPS data regarding its position as well as other flight data, collected by its avionics platform, especially using a high-integrity satellite navigation system (GPS/GNSS).

The data is collected by the ATC controllers and can be seen as an auxiliary RADAR since the ADS-B signal is emitted spontaneously by the aircraft at regular intervals.  The data sent by the aircraft to the ground station includes the following:

The datalink operated by the ADS-B system emits at various frequencies and the most common one are 1090 MHz and 978 MHz.

Usually ADS-B can fallback to the IRS (Inertial Reference Systems)  to assert the position if the GPS doesn’t receive signals.

An example: ADS-B data from Flight 752

As an example of the striking capacities of ADS-B, we depict below the real ADS-B data obtained from the Flight 752 from its departure to its final moments.

It has to be noticed that this information can even be freely visualized over the internet in a quasi ‘real time’ way by using various free softwares and internet services.

The ADS-B data also encompasses the so-called ‘SQUAWK’ code which is a four-digit transponder code used in aviation. This code is vital for a quick assessment of the situation of an aircraft.

Here are a few SQUAWK messages: 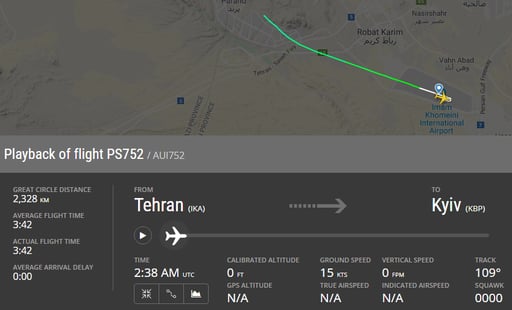 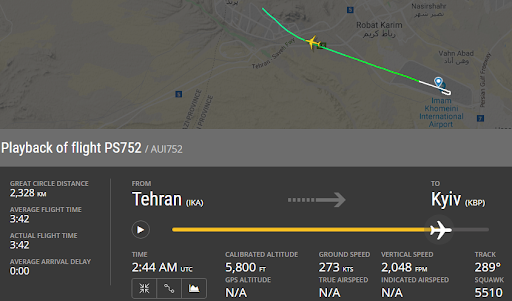 Using A.I and especially Machine Learning for helping operators to assert the nature of a RADAR object , is no more a ‘Sci-Fi’ dream.

Techniques using Neural Networks - especially Convolution Neural Networks - Bayesian probabilities, Support Vector Machines and Hidden Markov Models have been developed for decades and coupled to data storage and processing power, they allow the classification of RADAR targets with an important precision which can amount to 100%.

A.I uses radar characteristic signatures of an object, for example frequency or velocity over time and is able, using previously learned data, to classify flying objects in a given category with a small error rate.

The accuracy of A.I can be so high that it can distinguish immediately not only the nature but also the model of an aircraft and can decide if a flying object is a missile, a military aircraft or a civilian aircraft for example.

Why ADS-B and A.I matters in aviation

In the tragedy, the aircraft was presumably wrongly identified as a hostile aircraft by Iran's air defense systems.

Following information provided by Iran, it seems that a missile operator acting alone because of a “communications breakdown” considered that the Boeing 737 was a cruise missile heading in the direction of a sensitive IRGC (‘Islamic Revolutionary Guard Corps’)  site, and only had dozens of seconds to decide, if an anti-missile should be fired.

The communication with the military chain of command did not work and the missile operator was on its own and therefore apparently did not respect the precautionary measures to be taken to make sure of the nature of the RADAR object.

The goal of this article is not to speculate on the exact causes of the crash but to underline the benefits of conjointly applied ADB-S and AI, in such situations where a RADAR operators have issues to correctly assert the true nature of a RADAR object.

Such situation could unfortunately happen in any country equipped with anti-missile defense, mistakenly asserting that a civil aircraft is a cruise missile. Additionally in the present case, older USSR-designed missiles such as TOR may have been used by Iran and these missiles ‘do not understand’ the Friend-or-Foe (IFF) NATO code emitted by the Boeings.

On one side, the ADS-B system allows to track aircrafts and assert in  ‘real-time’  their position and situation. Therefore military RADAR operators can use this data to help them in their decision making.

Since ADS-B transceivers can be faulty or jammed, it is advisable to use AI as a second verification system, to detect the category of the RADAR object and immediately classify it.

Machine Learning can decide automatically if a flying object is a civil aircraft, a military aircraft, a cruise missile or a ballistic missile.

The tragedy of flight 752 could probably have been avoided, if at least one of the two technologies ADS-B or A.I had been used by a military RADAR operator. A double-check with the two redundant but technically complementary solutions could bring the risk of wrong assessment close to zero.

In cases of armed conflicts and stress as well as communication issues within the chain of commands, operators may be left alone, when they are without tangible data and time needed to correctly assert a situation.

Therefore such conjointly applied technologies as ADS-B and A.I can guide them to make the correct choice.

Internet of Things: Why Will It Come and When, Who Will Provide the Platforms and How Can We Make Money With It?
Understanding the Internet of Things and the Key Role, Radar Is Expected To Play
Radar Education - Let Us Bury the Cold War Paradigm!

Flight 752: Why ADS-B and A.I. Should Be Applied Together