In this article we analyze the tragic accident of the Pakistan International Airline Flight 8303 on 22 May 2020.

The analysis tries to be as objective as possible and grounds only on known facts. By no means, the author tries to judge anybody involved in this accident. Our thoughts and prayers are with the victims and their families.

This charts prepared by the Aviation Safety network is by far the best info we have available up to now and helps to make the course of the accident clearer. Circles marked in red have been added to relate with description below:

This is where, presumably on inquiry by ATC, the pilot responds: “we are comfortable, will make it inshallah”.

A comparative profile of a typical A320 approach is depicted on the graph in brown colour.

On reassurance from the pilot saying: “we will make it”, ATC clears them to land and the pilot acknowledges - CRC can be heard in the background at that moment it is indicating that possibly the gears were not down and locked. The aircraft had to dive at a very high rate (3100 fpm) to make it to touch down.

During this diving final approach, the pilot probably realized that a safe landing may not be possible and therefore decided to go around.

Either they forgot to lower the gears or if lowered, raised these for  the go around too soon. In this process due to high energy (speed and high ROD) they scraped the engines.

The bottom point of the curve depicts where engines graze the runway. 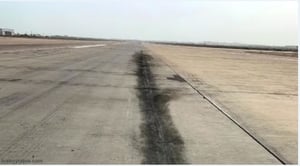 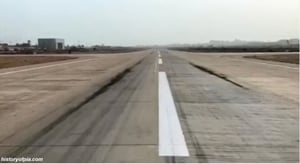 Probably the engines progressively failed due to the damage sustained during touch down without gear and thus the plane crashed close to the runway during a second attempt to land.