A relevant technique to classify RADAR object is to use a colored 2D map representing range, speed or frequency against time and color the map with power intensity. Here we represent examples of such typical RADAR data.

In the first article of this series, we presented an overview of the techniques used for classification with the neural networks. Here we dive into an example. 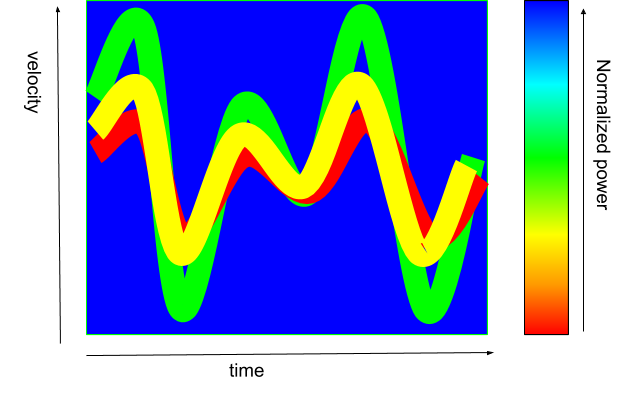 Convolutional Neural Networks (CNNs) are a special class of neural networks generalizing multilayer perceptrons (eg feed-forward networks ). CNNs are primarily based on convolution operations, eg ‘dot products’ between data represented as a matrix and a filter also represented as a matrix. The Convolution operation can be seen as an alternative to the Matrix product. The result can be seen as a regularization or ‘smoothing’ of the raw input data.

A typical Convolutional network will create a 3D matrix from RADAR data. For example the previous RADAR sampled data will be represented as a matrix of velocity x time x power intensity. 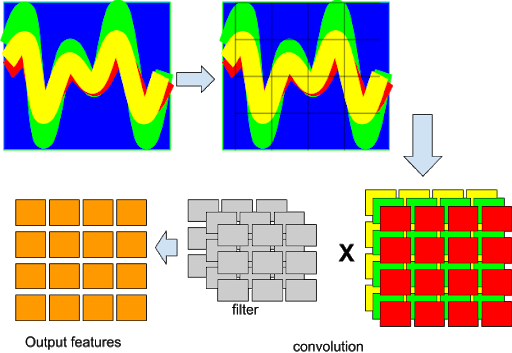 In the above representation, each cell represents a neuron.

The convolution layer is usually followed by a pooling layer and that is repeated for as many rounds as necessary,

Here we list and detail the main operations performed by a typical neural network used to classify RADAR data.

Over the years, several designs have been found to behave optimally for several classes of problems, usually Image Recognition. Here we list several neural networks designs that have been successfully used for RADAR data classification.

The LeNet architecture is one of the first CNN and was developed by Yann LeCun, Leon Bottou, Yoshua Bengio and Patrick Haffner in 1998. This design became very popular for the automatic recognition of handwritten digits and for document recognition in general. LeNet-5 was successfully used in order to achieve the classification of hand-written digits on bank cheques in the U.S.A.

This is a relatively simple design, at least from a modern perspective. It has some unusual features. For instance not all the data produced by the layer S2 are used by the following layer, the convolution layer C3 so to produce different patterns from different outputs.

LeNet-5 model was successfully used in [1]  to classify moving targets from RADAR Doppler data reflecting the changes in velocity (e.g acceleration/.deceleration) . The model was used as an image classificator from time-frequency image representations.

VGGNet is a ‘modern’ CNN which consists of 16 convolutional layers. It bears similarities to the AlexNet but have more filters. VGGNET has 1.38 million parameters and so it consumes a lot of CPU power.

Designs inspired from VGGNET were applied in the context of RADAR classification in [2] and [3]. It successfully distinguished objects obtained from RADARs placed in automotive systems. In [3] it could classify objects scanned by a car front RADAR and automatically decide if they were pedestrians, cyclists or other cars.

Module”. This inception module uses batch normalization and the gradient descent method known as RMSprop. The number of parameters are around 4 millions and it also requires important CPU power to be run.

GoogleNet was applied in [1] and [4] to classify RADAR data. In [1] the neural net was applied to imagery data representing frequency over time. The time-frequency image was generated after CWD (Choi-Williams distribution) transformation of 8 LPI (Low probability of intercept) radar signals.

AlexNet is based on five convolutional layers which are followed by three fully connected layers. It also uses very extensively the ReLu activation function. In the context of RADAR classification it was applied in [1]. AlexNet has more than 60 millions of parameters and so it is one of the most powerful CNN design.

The resNet family includes designs named ResNet50 or ResNet18. Resnets are residual neural networks which use the concept of pyramidal cells similar to the ones found in biological cortex neurons. ResNets use skips to jump from one layer to another ‘distant’ layers so to avoid the problem of vanishing gradients. A typical residual network such as ResNet50 is 50 layers deep. It was used in [4] and [5]. In [5] ResNets could classify data from Compact polarimetric synthetic aperture radar (CP SAR) and decide the nature of a ship.

Such neural networks designs like DivNet-15, ZFnets, Densenets and U-nets have been also applied in the context of RADAR classification. It is too early to decide which design fits best to a RADAR problem since contrary to image classification, using neural networks for RADAR data is just starting